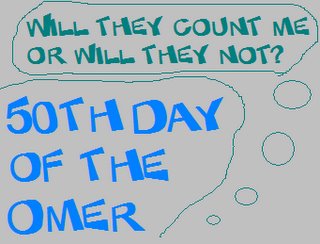 As today we have reached the 48th day of the counting of the omer,
tomorrow will be the 49th day. However, what will be with Shavuos - will we count it as the fiftieth day?
According to the Torah (Lev. 23.16), the commandment seems to imply that we should count fifty days. Although one could then say, "Oh, that's just the Torah. The rabbis surely must have cut it down to counting only 49 days like we do nowadays." However, Rabbi Yose, son of Rabbi Yehudah said that we are supposed to specifically count 50 days! Furthermore, no one in the Talmud - either tanna or amora - disagrees with him.
So far, the score is Torah & rabbis both going for 50 days and no one for 49.
However, Tosafos in Menahos says that they count 49 days, so how come the Talmud says 50? What's trememendously interesting here is the primacy Tosafos gives ongoing practice over prescribed law. While Rosh tosses Tosafos two suggestions in favor of another possibility, it's still a befuddlement to me why we count only 49 and not 50 days. While I have prepared a sheet (in Word format) for a presentation on Shavuos night at shul on this topic, I was wondering how come in between late antiquity and the early medieval period people stopped counting the fiftieth day? Is it maybe because the fiftieth day is to be counted on the holiday of Shavuos and at some point the counting got dropped from the liturgy? Anybody?
----------------------------
Tags: Omer, Counting of the Omer, Shavuot, Shavuos, Fiftieth day of the Omer, Sefiras haomer, sefirat haomer, sefirah

Any chance you can post your source sheet for those of us that won't be in the heights over shavuot?

Avrum,
I already linked the Word document in the posting. Do you need it to be posted on the blog?

It seems that you posted a link to Mt. Sinai Shul, not to your source sheet.

I think you have something wrong with your link. I only see the 2 wikipedia links and the link to mt sinai's website. I would guess you meant to link to your source sheet and the shul website and it was merged into one link?

"I was wondering how come in between late antiquity and the early medieval period people stopped counting the fiftieth day? Is it maybe because the fiftieth day is to be counted on the holiday of Shavuos and at some point the counting got dropped from the liturgy? Anybody?"

Why do oyu think people used to count 50 days and suddenly stopped in "late antiquity," as you say? The gemara never indicates anywhere that 50 days were counted.

Last Anonymous,
I mentioned in my post that "Rabbi Yose, son of Rabbi Yehudah said that we are supposed to specifically count 50 days", which is to be found in both Menahot 65b and Sifra, Emor 10:12. It is true, as you point out, that from a descriptive standpoint, the Talmud never states that 50 days were counted. However, we now move into a rough area: if we say there are a lot of things in the Talmud which people say to do, does that mean that they were ever done? We should take it on face value that since no one in the Talmud argues on him, then that's what was done, which prompts Tosafos to ask his/their question.

it seems that I'm not the only one making a tease posting about this upcoming holiday at Mt. Sinai - Josh has now put something up.