My First Book Gets Published 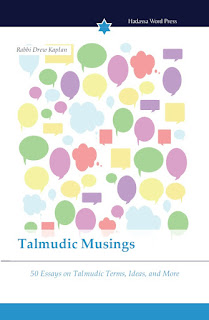 Earlier this year, my first book got published! While I have held off until now sharing this news with the world, I figure it's finally time to share :)

The book, Talmudic Musings: 50 Essays on Talmudic Terms, Ideas, and More, was published by Hadassa Word Press, a publishing company in Germany (the book is also available for sale on Amazon). While I had been thinking of gathering some of my essays that I had previously published on my various blogs, I hadn’t been actively looking to publish. However, once they reached out to me, I got curious. Although I had gone back and forth whether or not to proceed with putting it together, I ultimately decided to do it.

So, I gathered fifty of my blog posts on Talmudic topics, whether from this site, the short-lived Drew’s Views, or Matters of Interest, and set about converting them into a Word document. This was not simple and took a lot of work not only copying-and-pasting from the web pages, but also creating footnotes from the relevant endnotes (not to mention taking hyperlinks and noting them, as well).

While most of the essays remain in the form that they appeared online, some got some additions, most notably “Sages and Doctors Face-Off: Consideration of a Story in the Talmud” (pp. 78-84). This essay got a fair amount of addition from its original version, with both elements from Jennie Rosenfeld's 2009 dissertation ("Talmudic Re-Readings: Toward a Modern Orthodox Sexual Ethic”) and from Facebook comments in the discussion on the original piece.

For those less familiar with my style and approach to the essays included within this volume, here is how I wrote about it in the introduction (p. 1):

It is unclear to me as to how one would categorize the style of writing within this volume. It is neither necessarily academic, nor is it necessarily traditional. Of course, these terms do perhaps describe the style, perhaps they don't. The essays herein are not intended to serve as proper academic articles, per se, but hopefully will be of interest to those interested in such pursuits. Many of them seek simply to raise ideas, offer some possibilities, and serve as a helpful consideration for the texts under discussion. Many of the essays herein are attempts at laying the groundwork in aspiring to come to a better understanding of the texts, but not necessarily all-encompassing about the texts, nor serving as the final word on them.
While many of the essays may try to advance novel understandings of the particular texts in the Talmud, many are not intended to do so. Indeed, the style of many may be considered almost like encyclopedia entries on the topics, with straightforward explanations. A number of them seem to encompass both of these endeavors. Not infrequently, I come across certain topics, texts, or phrases discussed - whether in printed texts or orally - in a manner that does not seem correct, even if it is a prevalently understood one. Many of my essays in this volume were inspired by these seemingly incorrect understandings that I sought to correct.

I hope the essays included within this book are helpful for those considering various texts within rabbinic literature. Putting them in a book, going beyond simply having them on a few blogs, ensures that – even if the blogs go offline – the essays will remain in this world.

Of course, the question of who will purchase this book is another matter, Owing to its price tag, I’m not sure how many people will pick it up. However, if anyone knows of any libraries (perhaps university libraries?) interested in such a work, please let me know or them know. It would be great to make this work more widely available.
Posted by Drew Kaplan No comments: Links to this post