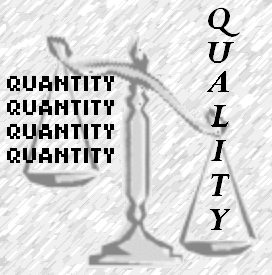 A realization I realized a few months ago is that I prefer quality over quantity.  Although one could probably extract that to describe my liquor preferences, this preference primarily pops up in my mind regarding Jewish matters.
The first example was what I wrote up earlier concerning the need for qualitative data versus simply having quantitative data.  It's not enough just to know how many people are coming to events, it's important to know how much they enjoyed it.
The second example is my preference/desire for Jewish groups to have Jewish content programming rather than simply social programming.  Anybody can have a party, but how about significant Jewish content to be involved in order to enrich attendees, especially if it's for younger Jewish folks? 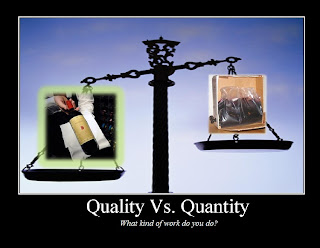 The third example is that I am not concerned generally about the decreasing numbers of Jews in America.  Granted, I believe that Judaism has something rich to offer to Jews and that they are missing out on something very valuable for living their lives by not exploring their ancestral heritage.  Nevertheless, our numbers will continue to get smaller, but that, in and of itself, does not bother me, as it's not about how many Jews there are, it's about the richness of Jewish life.  (I have a feeling I may need to elaborate on this sentiment in a separate post.)
I am not sure whence this preference of quality over quantity came, but I know that it has been growing more prominently in my mind in the last couple of years.


Posted by Drew Kaplan No comments: Links to this post