YCT Goes on its 1st Ever Spirituality Retreat 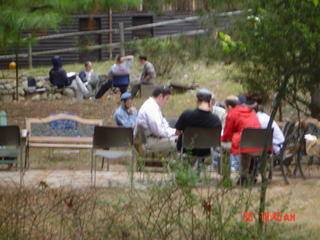 It was good. Nothing fancy - just good. Not perfect, but what is?
The highlight of the day and a half for me - aside from the actually decent food - was discovering, at least prima facie, what my spiritual connection was, or in other words, what spirituality was for me. Surprisingly, for me, spirituality is divorced from conceptions of God, at least for now. That isn't to say I don't believe in God - that is not in question, nor has it been since I heard of The Concept back in the day.
not only discovering it for me, but also realizing that everybody understands their spirituality or spiritual connection on their own terms, for themselves, and that there is no objective spirituality. Of course, this necessitates that New Age spirituality is also not for everybody, and that popular conceptions of spirituality don't always work for people, and surely not New Age ones. (If you want to see some pictures from the retreat, click here.
Posted by Drew Kaplan 2 comments: Links to this post

The Kosher Status of Smirnoff Ice (in America) 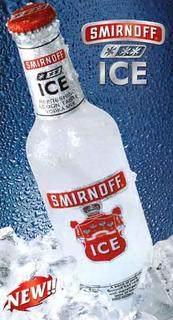 I like hard lemonades. I can stand beer, but hard lemonades really are a cool, chill beverage, etc. The problem is that they generally find themselves on kosher "not recommended" lists (e.g. the CRC) and I asked a משגיח with the circle K about them and he suspected that it was because they have glycerin (it could have been some other ingredient) in them, which comes from animals. Oy, not looking good.
However, I started doing some research. I e-mailed reps at Smirnoff Ice, who informed me that their product, as well as the rest of their products, contain no animal products in them, nor any grape juice (same with Bacardi Silver, but I'm not as much of a fan), which someone else had found out regarding Mike's hard lemonade. Furthermore clouding my understanding was Rabbi Abadi's perfectly okaying hard lemonades' kashrus status. Now what?
So, about a month ago, I resumed drinking said beverage.
Then comes along a guy to YCT's שחרית on Friday, who is in the kashrus industry. Guess what I ask him? You got it. His answer? Check out Rabbi Abadi's website. Imagine that!! So I tell him I've seen that already and ask why it's not certified. And the answer... they want $$ for השגחה. Now, I'm not saying that kashrus agencies, like the OU, are more interested in moola than in making things kosher, but at least I know what's up. Hence, my informed decision about drinking hard lemonades (especially Smirnoff Ice).

Posted by Drew Kaplan 4 comments: Links to this post

Yay, it was nice. No. 24, for those keeping score at home. Next year is silver.
After davening מנחה (or מנחתא for those Arameaphiles out there) during שקיעת החמה, I made it to shul for לכה דודי and stayed for מעריב, after which there was a big socializing-fest in the social hall, which was great there were so many people there, but I was unable to get to talk to as many people as I would have liked. But that's what happens.
I spent dinner at Sarah Jacobson's and Dikla's, which was a pleasant time, not only for the good food, but also the good company of twenty people. After dinner, there was an oneg around the corner, which was great as there were more people with whom it was pleasing with which to speak. At some point, it became evident that we were being on the loud side and had to depart. So we went to the front of the building and chatted for longer. 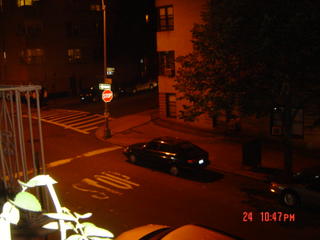 גם זו לטובה, though, it was nicer outside than inside, matter of *fact*, it was nice outside.
As we were leaving from having been out in front of that building, we stopped at the corner of 186th and Bennett (picture of said intersection at right), Yitz from Montreal made an amazing insight - that the Heights was becoming a little like the UWS (at which I thought "Heaven forfend!! thinking of tefillin dates and other permissive sexual practices - but then he explained how he meant) in that people get used to seeing each other around and when one goes on a date or, more awkwardly, goes on a few dates or, worse, many dates, one still has to deal with seeing this other person around, which is potentially and often awkward. Amazing חידוש!! This idea is still on my mind - not because there is any way of refuting it, but rather to explore its understandings and nuances it can bring to understanding gender/sex relations here in the Heights.
After chatting for another while outside, Max Davis, a fellow YCTer, invited me to his apartment for a beer, so I took up his offer. It was a nice time, having a Beck's, which isn't too bad of a beer, some kugel, and some desserty stuff and a quiet chat (quiet, because Dani Stieglitz, his roomie, was asleep) about life, YCT, girls, etc. On my way back, I bumped into Meir, my חברותא for gemarra at YCT, and we talked about the meal - okay, we spoke about the girls at the meal - for a little bit and I made it back to the apartment at 2.
After sleeping for 10.5 hours (don't worry about קריאת שמע, I woke up at some point, saying ברכות התורה and said קריאת שמע before סזק"ש), when I realized I was staying awake, I saw that I had three minutes before חצות and davened עמידה לשחרית, something I don't think I've ever done just like that, usually doing after a super-abbreviated פסוקי דזמרא. I then davened מוסף, read some, had lunch, read a little more, napped, and went to מנחה, then gathered some 20-25 people to come along with me as we had a סעודת שלישית at Mike and Laura Schultz's apartment, down the hall from where I'll be moving in about a week. It went well and we davened מעריב, and that was that.

Posted by Drew Kaplan No comments: Links to this post

Exhausted as I was, I made it out of bed, though fifteen minutes later than I had intended and showed up for שחרית an equally late amount of time. However, there was a little herring, crackers, and mandelbread b/c of something. However, there were two non-YCTers there: one was a YU musmakh who answers phones for the OU kashrus line, which was neat to ask him a question or two (even though he generally tries to avoid such things when not on the kashrus hotline) and the second was an interesting guy who I had seen a few times last year at the yeshiva, though I knew neither who he was or his connection to "Chovevei" - but he is the real person behind Mar Gavriel's blog, an interesting site (an absolute must-read is the What Does Judaism Say About Pre-Marital Sex posting). So that was cool and got to ask him some questions (e.g. why he calls shabbas "schnabel") - it's always neat to meet JBloggers (his blog is now linked to the right) in real life. 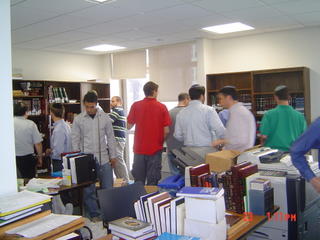 My next hope is to meet one of the most well-known - Esther Kustanowitz, but who knows?
School was fine, fighting off heavy tiredness, but we got to have our first (of more) שיעורים on נטילת ידים בבוקר, which was interesting, as it confirmed my understanding of the gemarra in שבת 108ב and 109א, which is so obviously NOT talking about washing hands in the morning (sorry, רש"י, but the רמב"ם was right).
After school, we started putting away more books on shelving, etc. (pictured).
Posted by Drew Kaplan 2 comments: Links to this post

For the first time ever, I will be helping to lead Rosh haShanah services! Whoopeee! I just don't really know them, which is a bit of a problem. I'll be blowing the shofar (by far the easiest part!), giving a couple of drashos (ooh boy), and doing mussaf both days (oy, this'll be hard - I don't know any -ANY!!!- of the tunes; thank God for Virtual Cantor) at an old folks home up in CT. For Yom Kippur, I want to enjoy (if one can enjoy Yom Kippur) an experience at HIR, where I spent Rosh haShanah last year.
Preparation's coming. Funny thing about it - I know I'm not going to be able to as prepared as I would like to. God help me!
Posted by Drew Kaplan No comments: Links to this post

the huge decrease of my movie-watching...

With readings to be done outside of class for three of my classes this year, I now no longer have time to watch movies in the evenings like I did sometimes this past year. Not only do I have readings, but also during the weekends I seldom have time to really watch movies. It's quite sad. Although I still have my Blockbuster Online subscription, I will cancel it, though I will wait until after the holidays are over - so after October; just on more month, and then I will go ahead and cancel my subscription.
Posted by Drew Kaplan No comments: Links to this post 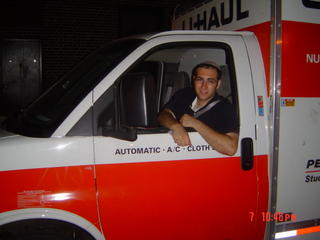 Although I really meant to post this three days ago, I'm only doing so now. This past week was not good, aside from school.
I spent Sunday afternoon of my Labor day weekend - after playing softball for the first time in years, which was fun, and which I'm hoping to play yet again this coming morning in seven hours - moving some of my stuff into my September apartment. I then spent Monday packing my stuff up. And then Wednesday after school I rented a U-Haul truck (my first time ever) for four hours, while moving my stuff. And the whole week I was tired and only jogged once! I look forward to a more awake week.
Posted by Drew Kaplan 3 comments: Links to this post

Yep, I "have" three apartments right now: one in which I am paying rent in and sleeping in, one in which I am receiving mail, and one in which I have the majority of my stuff - and all of them are several blocks away from each other. I don't mind all of this, except, of course, for the moving part. I just agreed to live in a place for September while my new more permanent, well, certainly less temporary, apartment is getting finished up in the next two to three to four weeks (who knows?), while I still have to move most of my stuff out tomorrow or this week or something. So, I'm going to try to U-Haul it. Anyways, this is not a cool weekend. Kind of stressful, not only for me, but also for my sister who's contemplating where to go to school for the fall as Tulane has officially cancelled the fall semester due to the flood. Which, btw, also has probably ruined most, if not, all of her stuff she had at school. Anyways, I'll see what I can move.
This will be my first night sleeping on Bennett Ave., which is where my September apartment is. It's neat, actually, as I can look down on Bennett - cool.
Posted by Drew Kaplan No comments: Links to this post