While on vacation in Florida, a difficulty presented itself to us: we would see a kosher certificate with a rabbi's name on it, but know nothing about the rabbi. Thus, even when there is a kashrut certificate (תעודת כשרות), that gives the [potential] consumer very little information regarding either the kosher supervising agency or the rabbi providing the supervision. Although for big cities, people may frequently not know who the particular rabbis or certifying agency is, but especially so when travelling and one has no sense of the local rabbinate. Now while one could do a quick google search on one's smartphone while pondering the restaurant, there could be an easier way of informing the consumer. Just as I have suggested for zoos and for Jewish communal agencies, it would be helpful if, on the kashrut certificate, it would include a quick response (QR) code (it looks like a two-dimensional barcode). The QR code that would appear on the kosher certificate would send the potential consumer to a webpage either on the supervising kosher agency's website, the supervising rabbi's website, or the restaurant/supermarket's website. (As an aside, this would also be helpful in the case of the Tav HaYosher, which would send the potential customer to either a page with information about the Tav HaYosher in general, a Tav HaYosher page with information about the particular restaurant, or a page on the restaurant's website.) The inclusion of a QR code (or Microsoft Tag or any other similar products) would be a quick and easy way for informing customers and it wouldn't be much more difficult to include on the kashrut certificate.
Posted by Drew Kaplan 5 comments: Links to this post 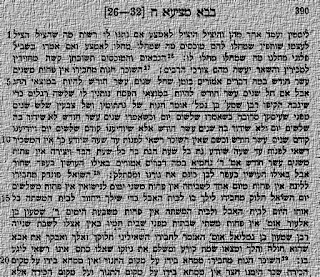 Onward on my quest to count up the most prevalent mentions of rabbis in the Tosefta, I finished yesterday on סדר נזיקין (you can see previous posts on סדר זרעים, סדר מועד, and סדר נשים). Of note, Rabbi Yehudah was, once again, far ahead of everybody else in the seder. After him were the חכמים, followed by a bundle of of the next three, all pretty close to each other. I am listing the top fifteen, all of which have double digit mentions or more. One peculiar note, though, is that עדיות was somewhat anomalous in that there were many more rabbis being mentioned than is typical when compared to others.  (For a comparison of this סדר in the Mishnah, see here.)
1 - רבי יהודה
2 - חכמים
3 - רבי יוסי
4 - רבי מאיר
5 - רבי שמעון
6 - רבן שמעון בן גמליאל
7 - רבי עקיבא
7 - רבי שמעון בן אלעזר
9 - רבי
10 - רבי אליעזר
11 - בית הלל
12 - רבי יהושע
13 - בית שמאי
14 - רבי ישמעאל
15 - רבי אלעזר
For the most mentions in each tractate, here is the listing:
בבא קמא - רבי יהודה
בבא מציעא - רבי יהודה
בבא בתרא - רבי יהודה
סנהדרין - רבי יהודה
מכות - רבי יהודה
שבועות - רבי שמעון
עדיות - חכמים
עבודה זרה - חכמים ורבי מאיר
הוריות - רבי יהודה ורבי מאיר ורבי יהושע וחכמים

For our first gathering of Clal's Rabbis Without Borders Fellowship (of which I am among the participants of the cohort) next week, we are to read Dani Shapiro's Devotion: A Memoir. I am not used to reading such books - most of my reading consists of either the New Yorker or academic articles - in fact, this book is probably the first memoir I've read (unless there were some in college I read (but that's been a while)).  This book was both interesting to a read because it was an unfamiliar genre as well as somewhat frustrating to read because of Mrs. Shapiro's perspectives.  As this book was assigned reading to a bunch of rabbis coming together to discuss, my initial thought was that it was about a woman seeking to connect Jewishly and how we can learn from her and trying to reach out to Jews who are on the periphery - I was sort of correct.
Fortunately, due to my 2.2 mile walk to shul, I read 1/5th of it walking to shul on Thursday on the first day of Sukkot, the second 1/5th walking back, the third fifth walking there on Friday on the second day of Sukkot, the fourth walking back home, and finishing the last fifth on Friday afternoon before shabbat. It was nice to have such an enchanting walking partner as this book, for it was definitely a book who desires an attentive reader and I was certainly sucked in, even thinking about the book whilst in shul.
Shapiro presents herself in this book as seeking out an emptiness in her life - a spiritual emptiness which he has tried involving herself in yoga but still looking for more.  The most salient expression of her place is found early on (10-11):


I needed to place my faith in something.  I didn't want our family's life to speed by in a blur of meals, schools, camps, barbeques, picnics, vacations - each indistinguishable from the next.  I wanted to slow it down - to find ways to infuse our lives with greater depth and meaning.  My own childhood had been spent steeped in religious ritual.  There were rituals for eating, speaking, sleeping, praying.  I never knew why we did what we did - it was simply the way it was.  I had fled this at the earliest opportunity, but replaced it with nothing.

What greatly frustrated me about her telling her Jewish journey was how many lacunae there were! If a/the central point of this book is her trying to wrestle with incorporating Jewish practices into her life, her family and especially with her son, what happened on the opposite end, so to speak? How did she drop what she had Jewishly growing up? She mentions (frequently) that she grew up not only going to Jewish schools, but yeshivos, no less, so she presumably learned a lot about Judaism. Where did that go? She mentions that she learned by rote and understood nothing, but then what? That would seem to me to be a big crux of her story - how and why did she drop her Jewish upbringing? She briefly mentions going to college and changing things, but she doesn't mention what caused or underlied that decision....
I wonder if a part of that lack of description of her drifting away isn't a part of a broader issue of her being somewhat - for a lack of a better term - fuzzy relationship with Judaism.   It seems that whenever it comes to Jewish matters, there is a fuzziness and uncomfortability with what is going on through her telling. Why is her relationship with Judaism so? It seemed throughout that she made decisions about guiding her life in certain ways and then doesn't understand why she arrives at such consequences in her life. It seems like she's gone through life worrying about a career and a husband and a child and hasn't really thought, aside from her yoga practice, much about her life.
Anyways, she has plenty of frum family members and her Jewish identity is largely wrapped up in her parents. While she struggles throughout with her deceased mother, she loves her deceased father greatly. It is him to whom she largely attributes her Jewish practices and greatly admires. She views him as representative of Jewish tradition.  It is a really dear and sweet relationship she has with her father, I must say.
As a Modern Orthodox Jew, it was interesting to see that her family has a significant connection to the YU world.  She mentions that Rabbi Zev Reichman and Rabbi Daniel Feldman are in her family (80), but the most significant piece was an excerpt about the Rav (195):


I remembered a story my aunt Shirley had once told me.  A famous Orthodox rabbi, Joseph Soloveitchik, paid his respects to my grandmother during her convalescence after a massive stroke following my grandfather's death.  My grandmother had already lost use of the left side of her body, and had lost most of her ability to speak.  But through Shirley, she managed to convey her question to the rabbi.  why, she wanted to know, would God visit such hardship on an ordinary woman?  She understood the trials God inflicted on great men like Abraham and Isaac, but why on someone like herself?  The rabbi's answer was this: Mrs. Shapiro, do you realize what you're asking?  You're asking to have a dialogue with God.

She deals with other topics in the book, but the Jewish pieces were the real points of interest for me.  I look forward to discussing it next week when our fellowship gathers :)

Posted by Drew Kaplan 3 comments: Links to this post

Yesterday afternoon, as part of a Beach Hillel program, I saw the movie "UN Me".  Now, while I attended partly because of my job and association with Beach Hillel, I was interested to hear criticisms of the UN.  It wasn't a topic I had ever particularly given any thought, let alone any attention.  So, I watched.
The movie, itself, discusses what the UN is supposed to be and provides several in-depth examples of how it is sadly incompetent/ineffective, such as peacekeeping operations in Rwanda & Cote d'Ivoire, the IAEA & Iran, and the terrorism specialist not dealing with terrorism, amongst others.  The movie would've been horribly depressing were it not for the amusing string of humor woven throughout the movie by the "star" of the documentary, Ami Horowitz. 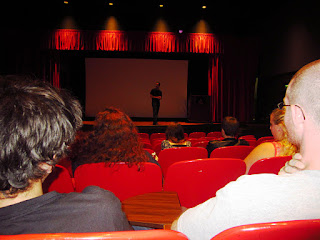 One of the cool things about the showing was that Mr. Horowitz was on-hand to take the audiences questions, both on-stage and off.  Some of the students, it should be noted, were certainly tremendously appreciative of such an intimate audience with Mr. Horowitz.
Coming away from the movie, I felt two things: 1) Thankful to be informed about the dysfunctionality of the UN and, more strongly, 2) Frustrated and sort of upset about the whole situation with the UN.  Although Mr. Horowitz said an important course of action that people can do is to contact our congressional representatives and express our concern with them, I wished more could be done directly.  A severe issue is peacekeeping, which the peacekeepers often fail at doing - I wish I could bring a team or multiple such teams to an area such as either Darfur or Southern Sudan to enforce the peace and protect the innocent people there, whether by myself or, if I had millions upon millions of dollars, to provide for such personnel.  Ah well, I am sure more can be done by people, but, ultimately, the simplest method is what Mr. Horowitz suggested.
I look forward to when the finished version is released in the springtime and hope it receives a large viewership.
Posted by Drew Kaplan No comments: Links to this post