There have been three recent significant influences on my life in recent months, which have been exciting, especially affecting my output of writing.

Moving Beyond “Analysis Paralysis”
The first of these three was moving beyond “analysis paralysis”. When I got into real estate, my real estate productivity coach said to get out of my head and to stop worrying about “analysis paralysis” and just go/do, even if I get something wrong, it’s still an opportunity to learn and improve. At first, I thought he was just saying that for me, but then I met with a mortgage loan person and I heard the exact same thing about real estate agents needing to really get away from this analysis paralysis and then go and do. Once I heard that from him, I realized that it has been such an unfortunately significant barrier to my actions, both in reaching out to people, as well as to my writing. There has been a lot that I’ve held back on over the years simply because I thought writing pieces of mine were not 100% perfect/ready for the public to see.

If I Need, Simply Revise
Following-up on the first lesson was, even if I put something out, I can easily go back and revise it. This idea actually occurred to me in reading about Rashi and medieval manuscripts, especially that “Authors never intended them as final statements but as snapshots of their current thinking, as works in progress.” If that was the case for medieval manuscripts, then all the much more so in the age of the Internet, when we can easily revise/edit/add what we’ve previously written. Paired with just doing and going beyond analysis paralysis, this is actually pretty powerful.

Gleaning from Gary Vaynerchuk
A third and much more recent influence has been the wisdom of Gary Vaynerchuk. While I had heard of him over the years, I avoided his material, even when people shared it with me. Two and a half weeks ago, my real estate productivity coach shared a talk of Gary Vaynerchuk’s, so I made sure to listen to it. Wow! It was so fascinating on a number of levels, but not the least of which was that he both offered critique, as well as offering suggestions to people. There is a lot of material of his that I have found fascinating, especially moving beyond fears of insecurity and doing what you’re good at. Post content and do lots of it is another of his pushes. While that’s been great, I also have found his suggestion to focus on one thing and become an expert in that. While I have not fully unpacked about my appreciation of his material, those are some key aspects.

Going Forward
Taking these three influences on me in recent months together has yielded an encouraged me, looking to both be more willing to reach out and talk to people, but also less scared about putting out material for consumption. And, moreover, putting out more material. Stay tuned….
Posted by Drew Kaplan No comments: Links to this post

Weight-lifting with Rheumatoid Arthritis: I Dropped it For Awhile, But Returned to Lifting

When I first noticed I was getting rheumatoid arthritis, with my fingers curling and I couldn't move him well, I thought there was something wrong with how I was moving them, especially with regards to barbells and/or dumbbells, that it was somehow negatively affecting my hands and fingers, so I decided I would stop. However, once I went to see a rheumatologist who told me what was going on and had me on medicine, I returned to lifting weights.

However, when one of the medicines I was taking was reduced to small doses,* I began noticing further deterioration of my joints, particularly my elbows and shoulders, causing me to have reduced physical abilities, which were quite noticeable (to me) particularly when lifting weights. At some point, due to this frustration of not being able to lift as much and having a general feeling of less strength in those joints, I felt the whole endeavor was fruitless. So, I stopped lifting weights only a few months after having returned to it.

Nearly a year later, though, I realized it wasn’t tenable for me, so I returned to it a little over a year ago. I realized I enjoy lifting weights and it is a part of who I am and, without it, I just am not as happy - physically, mentally, nor emotionally. Moreover, I've realized it is been beneficial in at least two ways: 1) just simply being able to lift up my children. It was a lot harder to lift up my kids when I was not lifting, as well as picking up other things around. 2) Another way in which it has positively benefited me has been specifically with regard to my rheumatoid arthritis. Going to the gym and lifting weights (as well as ellipticalling) gets my blood flowing and it helps especially my fingers to move more easily than without going to the gym and lifting weights.

It has been greatly helpful and I hope to continuing to go to the gym and lifting weights, as well as ellipticalling to get in some cardio. For those of you who are despairing about lifting weights while experiencing your rheumatoid arthritis, it may be well worth considering, as I have found it to be beneficial for me.
----
* The medicine was prednisone, which was fantastic, in general, and wonderful for weight-lifting, in particular. However, due to the dosage schedule getting gradually reduced, the effects for weight-lifting became negligible.
Posted by Drew Kaplan 2 comments: Links to this post 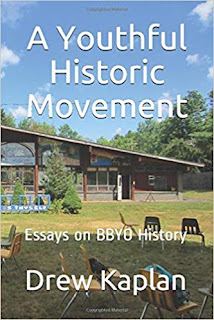 I published my second book this weekend on BBYO.[1] Focussing on key essays accompanied by several appendices, the book is coming out at an auspicious time, as this year marks the 95th anniversary of BBYO. In just five years, the organization will be experiencing its centennial anniversary, which should hopefully yield an increased interest in the organization's history.

Two key essays anchoring this work focus on the first five years of AZA, prior to its incorporation within B’nai B’rith, and one on finding permanent facilities to house BBYO’s leadership programs. I composed both of these when I was in college in the early-mid-2000s. These two essays appear with some updates for this edition. A third essay, which I recently posted, concerns the creation of BBYO’s website (which is something which very few people know). There are a couple of other essays which do not depend on research and are my own contributions to BBYO history (including an updated version of this essay).

Not to be forgotten are the appendices, two of which are transcriptions of BBYO memorial plaques, while two further appendices concern my own involvement with BBYO for credential purposes. However, the appendix that is the most significant is the listing of the location of every single BBYO International Convention.[2] I’m not aware of anywhere else providing a list this comprehensive of BBYO International Convention locations.

The first time the idea occurred to me to publish a book of essays of BBYO history was in 2004, having produced a couple of essays and was considering a third. However, having gotten involved with rabbinical school that fall, I dropped that third essay, as well as the book idea, altogether.

However, having returned in the summers of 2011 and 2012 to serve as a Judaic educator at ILTC those summers reignited my interest in the organization and the study of its history. That subsequent winter I decided to reach out to someone who had been in my region and had created BBYO’s website from the beginning and, thankfully, he still had some materials from that time, which was eminently helpful in my crafting a piece on the origin of the website.

While trying to put together a book that summer in advance of having a third child, I dropped the project, even though I had moved it along fairly well. Perhaps I got busy with life, work, and family, but I let it collect virtual dust for years. That is, until this summer, when I realized that I could get stuck with these files forever never seeing the light of day and it would be better to finally publish it. So, I did.

Having published it on Amazon, I can go back and revise or update it as need be, but it’s a great start to providing a helpful resource for those looking to learn about this organization’s history.

A Youthful Historic Movement: Essays on BBYO History is available both in paperback and ebook.
[1] My first book was published in 2017.
[2] Although I have not discovered the locations of the conventions of 1946, 1947, 1950, 1951, 1953, 1954, and 1955 – if you can point me to a resource wherein I can find the locations of those conventions, I would greatly appreciate it (and provide you with a shout-out in the updated version).
Posted by Drew Kaplan No comments: Links to this post