After Several Years, Hanging Up My BierBuzz-Writing Hat 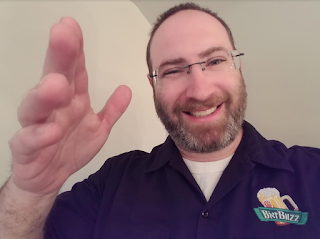 As I mentioned in my previous post, I have wound-down my writing for BierBuzz, as I published my final post for the publication today. It has been a great experience writing for BierBuzz these past several years, beginning in earnest with a post in March 2016, a post in April 2016, with hundreds more posts to follow.*

Gaining Great Experience
Throughout my writing time for BierBuzz, I not only gained a lot of writing experience, having published over 300 posts, but I specifically gained a great confidence in dealing with press releases. While I composed several press releases for BierBuzz events in my first year, which furnished me with valuable experience, I was able to develop an eye towards evaluating the hundreds of press releases I then saw come my way – I could discern the quality ones from those lacking in quality.

I certainly developed a certain writing style when it came to beer, but also learned a lot about the contemporary craft beer scene, as well as various trends, such as light IPAs, hazy IPAs, the rise of canning, especially 16oz cans, and more.

One of the most valuable takeaways for me was developing a lead-generation system and method for tracking both beers out there, as well as following-up with breweries (whether their internal marketing people or their PR firms), and then developing my internal time-tracking of when beers would arrive and how many days it would take to publish their reviews.

Another aspect of my experience that really could be applicable to all of my blogging experiences was gaining a comfortability with meeting people who are in different walks of life than myself, as well as meeting people and having conversations that I never would have otherwise, which was so enlightening and pushing me out of my comfort zone.

Gaining Great Beer
Okay, let’s be honest, there was more that I gained than simply the experiences, skills, and connections, but there was also a lot of beer. While I attended some festivals and visited some breweries and received a bunch of free beer, there was also a lot of beer that came my way for review purposes. During the first few years, I was reactive: if there was beer offered and/or a press release came my way, I would request review samples. However, in the past 11 months, I realized I could be proactive.

In these last 11 months, I have had a lot of beer and wrote a lot about it. In fact, of the over 300 articles I published on BierBuzz since March 2016, I published 175 of them in the last 11 months, alone, with 165 of them being beer review posts(!). It ended up that while over 100 of my posts were on beer news, nearly 200 of them were beer reviews.**
This increased activity has been great for my experiencing of the national landscape of craft beer, not to mention the amount of beer arriving at my front door step (yes, literally), and it was so much that I had a few events to host folks to help me drink the beer, as it was more than I could drink.

Let’s be honest, I am going to publish written content online, why not something I really desire to have me be seen as an expert? Furthermore, it hit me one day after this realization that consistently working on something day in and day out is a great way to become an expert at something, but do I really want that? It’s basically reverse-engineering the notion of working at something for 10,000 hours and becoming great, but what if you have no intention of becoming great and end up becoming great at it?
What if I can deploy that time elsewhere in my writing and develop my writing expertise elsewhere?

What next?
For now, I have no plans of continuing on as a beer blogger, but will it stay that way?
As I mentioned in the previous section, dropping beer-blogging out of my life frees me up to write about other passions of mine, which is great. Also, I sometimes have a feeling of being pressured to drink beer, write about, and publish the material. Sure, sometimes, it can lead me to drink beer when I wasn’t planning on it just to keep up with what’s coming in, which is really unfortunate, as one should want to drink beer rather than feel compelled to do so, in a quasi-obligatory fashion.

That having been said, beer-writing is something I know how to do, I know how to get the beer, write about it, and publish about it. And, best of all, I can get not only a lot of beer, but some really tasty beers out there that I wouldn’t be able to otherwise buy.
If I were to return to beer-blogging, it would be to write in a niche, as I have shared my thoughts elsewhere on a couple of possibilities. Nevertheless, I need a break from it for now.

* My first post was published in October 2015, before officially joining the publication.
** Which means that, prior to 11 months ago, more of my posts were on beer news than beer reviews.
Posted by Drew Kaplan No comments: Links to this post