Some Comments on Michael Steinhardt's Challenge to Orthodoxy 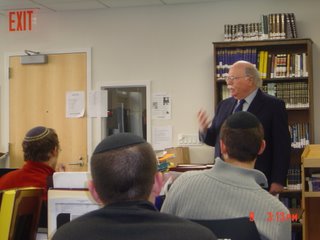 On Thursday 9 February, Michael Steinhardt came to speak to our school. While this is not news (I already posted about this on the Chevre blog a couple months back), the Edah Journal has recently published his remarks to the yeshiva, entitled "A Challenge to Orthodoxy: Remarks at Yeshivat Chovevei Torah, February 9, 2006 ". I'm sure some buzz is going to go up about this, as the new issue has already been indicated by a couple of Menachems: Butler and Mendel, so I figured I'd put in my two cents (for now - I'm not planning on a thorough analysis or giving all of my opinions on this topic, but a decent chunk).
I thought that he had some good critiques of Orthodoxy - things which needed to be said.
I was already aware, going into the speech, of his ideas on Orthodox not being so charitable with the non-Orthodox, while the non-Orthodox are big supporters of the Orthodox (as reported by the Jewish Week) (although this brings to mind a statement Rabbi Wein made that decades ago you would see a lot more non-observant Jews giving to Orthodox institutions, though it has been slowing up in recent times), which he did bring up, but he had the following to say on the separateness and lack of ability on the behalf of the Orthodox minority to [positively] influence the rest of [North American] Jewry:

...one must ask why Orthodoxy, with its relative isolation and insulation, doesn’t work for the overwhelming majority of us. Orthodox Jews go to different schools, eat different food, marry different people, often live in different neighborhoods, and have, in some important areas, different values.

It's a good question. I don't have the answer now, though trying does help. And that's what we as rabbinical students future rabbis are supposed to do, though

Even being sent by the God I don’t believe in, and educated by a Rabbi I adore, a group of one-gender Orthodoxy “young ‘uns” are going to have a little difficulty changing this miserable Jewish world.

I would like to offer you the opportunity to be a partner in renaissance with all of kelal Yisra’el. I ask that you recognize that non-Orthodox Jews have values also, and that these values are not empty. To do that, you must learn to judge non-Orthodox with the benefit of the doubt (“le-kaf zekhut,” as the Rabbis say). I ask you to focus not only on their glaring weaknesses; try to respect the commitments of non-Orthodox to education and critical scholarship, to family and tsedaqah, to Israel and to solidarity with all Jews. I do not deny the excesses, the materialism, the assimilation and the ignorance that are eroding the non-Orthodox world. But the impression that non-OrthodoxJews are living meaningless lives is a caricature. We need to see each other as equals who are able to teach the other something. Frankly, this is quite a challenge.

He put the issues on the table. I thought, however, that he was preaching to the choir, as we already are sensitive to those issues. Nevertheless, it was good to hear a concerned outside voice on this topic.
As to his trying to build up the Jewish community (at least in North America), he is concerned about demographics - he wants more involved. What struck me about this concept, at the time, was that I, as an observant Jew, often see things with regards to leading more qualitatively Jewish lives, though not so much on the agregate level. He and other major Jewish philanthropists are concerned about demographics, per se, which strikes me as weird. However, one would be blind to ignore the tremendous benefits that they provide on a large scale.
There was some further discussion, especially that he admired the Orthodox commitment to Jewish education and family life and that what he sees as the specialness of the Jewish people (I noted this in the earlier posting, though it is elaborated on in this Jpost article from a week ago:

It comes from one thing - the history and continuity of Jewish values, the overwhelming first of which is our overwhelming focus, in terms of time and energy and money, on learning, on education, on memory. That has continued for 3,000 or 4,000 years and has made us the people we are. It is not the only Jewish value but it is the predominant Jewish value, along with tzedaka and some other things... I think if we introspect hard we may find a few others that are Jewish values and that's what makes us Jews as far as I'm concerned. And they don't require a belief in the supernatural.

The problem with a Judaism without God is figuring out direction, for starters. I'm sure there are many more problems with this sort of God-less Judaism (I'm sure many would be quick to point out the oxymoronic value of that term).
He continues on in that article to speak of a "21st century Judaism":

Although he did not articulate this idea at the time of his visit, it is what's underlying his thinking regarding Judaism and the Jewish world today.
One last thing which I think is interesting is the end of that article, where the author states about Steinhardt

This is the financial brain, remember, who made hundreds of millions by bucking trends and defying conventional wisdom. This is the iconoclast, don't forget, who planted birthright in the heart of a barren, even hostile, Jewish establishment landscape. This is his lueprint for wooing the complacent, assimilating multitudes - provocative, determined, unconventional, just like Steinhardt himself. And this is his Judaism - an insistently, if sorrowfully, God-free Judaism that will challenge, I suspect, the many who lazily consign the things they don't understand to a force they conveniently call God.

What may come of his ideas, time will tell, although now that Birthright is about to reach its 100,000th participant (I was somewhere in there), time has already started to tell. Although, as Steinhardt admitted to us, that that has been by far his most successful program, but with none to match or follow up with it.
Okay, let the comments begin.
----------------------------
Tags: Michael Steinhardt, YCT, Yeshivat Chovevei Torah, Birthright Israel, Judaism, Jewish world, Jewish people, Jewish education, Orthodoxy, Edah Journal
Posted by Drew Kaplan

Steinhardt arrogantly represents what is wrong with much of Judaism in America. (I was going to say "non-Orthodox Judaism" but that is overbroad.)

He's trying to create a Judaism without God. What's the point? So we can point to our continued tribal existence? Judaism isn't about demographics. It's about avdut haShem. That's it. If we can't keep it going based on service to God and obediance to His Torah, then what's the point in remaining Jewish or keeping Judaism alive?

I revised my original thought that said "non-Orthodox Judaism" because I think that's unfair to those Conservative Jews that believe in God and Torah, but view the halachic process differently. I may disagree with them, but at least they're not spewing forth the idiocy that Steinhardt is.

And let's face it, if he weren't wealthy, nobody would listen to him. My challenge to Steinhardt is to think about what the purpose of Judaism is, if not for God. Otherwise, much of his rants should be ignored.

While I mainly agree with you, JDub, regarding the sine qua non of God for Judaism, I would disagree that there would be no point to a Godless Judaism (even though I called it an oxymoron in my post (I'm sure there's some way that that works out to not be a contradiction)). I think that there is definitely value to leading some sort of Jewish lifestyle, having a Jewish consciousness, or at least keeping up Jewish ideals, practices, and/or rituals. Some of these things speak to people's spiritual, intellectual, or some other form of their desires/needs. There is certainly a place for Judaism in someone's life even without God. That having been typed, it's certainly not the same thing as one with God.

From the picture it looks like he is not wearing a kippa. Was he wearing one while he was in the beit midrash/ shul? If not, it shows a basic lack of respect.

Anonymous,
That's an interesting point - I don't believe he was wearing one. However, to say it's disrespectful - I don't think that's so. As for God (the one in which he doesn't believe), he wouldn't find it disrespectful. As for the yeshiva, we know he's atheistic and not Orthodox. As for a beis midrash, maybe his understanding of one would not require one. Trust me, I don't think he was lacking in respect nor was he trying to be disrespectful.

what was the title of his talk at YCT? the same as the Edah Journal article?

Who cares whether he wore a kipa or a turban or a hairpiece? How petty of you. A man who can lounge quietly in the lap of luxury puts significant wealth AND ENERGY, GOODWILL AND TIME into introducing young Jews to Israel and their heritage, attempts to assist Jewish educational programs throughout North America and tries his best to open lines of communication between streams of Judaism and you care whether he wore a kipa?

He's arrogant because he dares to say the obvious which is that the Orthodox community has taken openly from the non-Orthodox community and then as it has become stronger has vilified and alienated those Jews whom they consider to be sinners but were good enough to be givers?

How about this: you can't create faith in people where there is none. You can't make people feel at home when you keep kicking them in the teeth.

And even if you disagree that you should respect them and try to open lines of communication, you think it's not about demographics? Think again because all those day schools and yeshivas will suffer and many will close. Your ability to find spouses and partners will diminish. And really, although you will continue to blame other movements, you will have directly assisted with the demise of a significant part of non-Orthodox Jewry because of hubris. Wake up.

You sound angry. It is not good to be angry. I posted regarding the kippa. I was not taking away anything from the many good things this man has done. I am simply pointing out that I believe it is disrespectful to walk in to a shul/beit midrash with an uncovered head, regardless of your personal beliefs. You routinely, on any given shabbat, see non-Jews enter a shul for a friend's bar mitzvah wearing a kippah. I wonder if, knowing that it is required to dress a certain way, Steinhardt would have similarly acted with such disrespect in a church or mosque. He should have known better - that's all I'm saying.

Jonathan Rosenblum says it well: "Jewish ignorance and apathy should be our concern, not numbers."

It is about numbers. It's not just genetic stock and its diversity that are important, it's also the support of other groups that is important. Why are Jews in France under so much stress while Jews in America less so? Numbers. Don't kid yourself.

No less important is the heinous notion that somehow one group is better than another. This just leads to greater problems. One day you're a Jew who goes to shul, attends synagogue, supports the community and thinks of yourself as a good Jew and then suddenly the next day somebody tells you that he's a better Jew. How does he tell you? He dismisses your rabbis as poorly trained (or worse) and refuses their conversions and divorces.