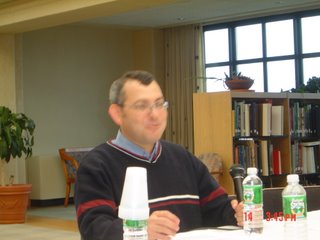 (This posting is the second posting of Wednesday's conference on Modern Orthodoxy (sponsored by the Judaic Studies program of the University of Scranton co-sponsored by Edah), as a continuation of the first. Tuesday's postings: first, second, and third.)
After lunch, the afternoon was dedicated to "'Modern Orthodoxy' in Israel" (I added the extra marks around Modern Orthodoxy, as Modern Orthodoxy in Israel is not quite the same phenomenon as it is in America whence it originated). The first speaker was Prof. Benjamin Brown speaking on "Three 20th Century Jewish Political Theologies: Torah State, Halakhic Democracy and Da'at Torah." An interesting perspective on da'at Torah was offered by Rabbi Yehudah Mirsky:

If we think in terms of Weberian forms of authority, I think that one of the things that strikes me about da'as torah is the manner in which it is presented. The second thing is what [?] said before that it seems to be the substition of charismatic for rational authority. I mean, all rabbinic authority is traditional authority, so that base is always covered. ... I really liked how you (Brown) defined political theology at the outset; I thought that it was a really excellent, important definition. And then, in precisely those terms, I'm not sure that da'as torah on its own terms works, because it seems to me to be, to the extent to which it's theological, it's a blueprint not for a social or political order, but for the organization of one sub-culture within a larger political order to which it's dialectically-related. ... The idea of choosing within da'as torah, I think the identities within it are still rather ascriptive.

The second was Prof. Arye Edrei on "A Priest Anointed For War: Rabbi Shlomo Goren and the Re-Invention of the Jewish Military Tradition." The last of the afternoon was Rabbi Ariel Picard, who spoke on 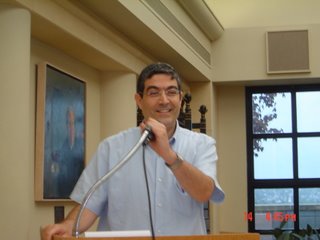 "Rabbi Ovadya Yosef, from Jerusalem to Cairo and Back: Sociology and Halakhic Policy." From this last one, I have two quotes I would like to mention. The first one is from Dr. Rabbi Alan Brill on the popularity of Rav Ovadia Yosef:

It's not the fate of who he is, it's the function that a legal decider who gives leniencies plays for a Modern Orthodox community. Modern Orthodox tend to gravitate toward deciders who are lenient regardless of what their ideology is. And there's a relationship there that treats him as a product being used by others. For example, right now there is the Lakewood-trained posek Rav Abadi, who is now becoming the darling of the Open Orthodox communities in America because he is lenient. It says nothing about his ideology....

The next one was said by Dr. Kurt Anders Richardson (a Christian theologian who spoke before I arrived on Tuesd 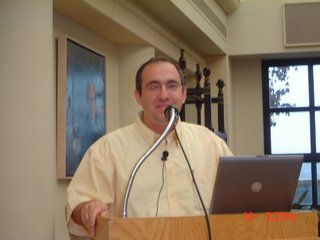 ay and provides some interesting insights from a different perspective) regarding one aspect of Church-State interplay among people:

In the United States, the "Godless Constitution", as it is called, doesn't, however, carry any secularist ideology, either. There is no code of values installed in the Constitution other than the human rights of the Bill of Rights, etc. and the amendments. It must be remembered that the First Amendment is not a Church-State separation amendment, it is a religious liberty amendment, so that wherever the religious laws do not conflict with the constitutionally developed legislation, you're completely free to regulate yourself, but on a voluntary basis. So, the rebbe, the priest, the pastor is going to be very frustrated.

Thank you so much for passing on this information to us. I am sure the conversations around the lunch and dinner tables were fantastic.

Were there any people who refused to come because of the crosses?

Rav Gil,
Inasmuch as the topics discussed at the conference do spill over past the appointed time-frame of 1940-1970 (the title of the conference is "Modern Orthodoxy 1940-1970"), it doesn't spill as far as the Internet Age. I can't remember which talks spilled over into the 80's or 90's, but I think it happened.

Interesting comments on sociological factors in halakhah by R. Aharon Lichtenstein in his article in the current issue of Tradition. Don't worry if you don't have it. I'll be blogging it next week.

Shalom Drew,
Thank you for your comment. I think "Daas Torah" does presume to suggest a political order. Not in the modern sense, deifinitely not in a systematic manner, but still. If a doctrine states: "This and this type of people are those who are supposed to rule" and bases this claim on religious argumentation - I think it deserves to be considered a political theology.