Sleep in the Yerushalmi For those who don't know, I have an interest in sleep in the Jewish tradition. As very little has been written about this interesting subject, one of my hobbies is researching and, hopefully, writing on this topic. So, this afternoon, I spent poring over the [English translation (Neusner, what other English translation is there?) of the] Yerushalmi Talmud, sections Berakhot, Shabbat, and Sukkah for statements regarding sleep. While Berakhot fortunately had a number of statements to say about it, the latter two had little. I was wondering if other tractates in the Yerushalmi have much to say about sleep and beds. For your enjoyment, I have listed below my findings (pretty much taken verbatim from Neusner):

stuff about King David and wakefulness

And on which basis? R. Aha and R. Tahlifta his son-in-law in the name of R. Samuel bar Nahman, “’Be angry but sin not; commune with your own hearts on your beds and be silent. Selah.’”

This disputes, for R. Joshua b. Levi used to recite psalms after [reciting the Shema’ at bedtime].

When do they turn over the beds [making them lower to the floor in a house of mourning, as a sign of mourning]? …

[since they do not permit one to show signs of mourning on the Sabbath].

It was taught: The state-bed [a low-bed] may be left upright and need not be turned over.

R. Simeon b. Eleazar says, “One detaches the straps [from the bed], and that is enough [of a sign of mourning].”

R. Jacob bar Aha in the name of R. Yose, “In the case of a bed with a curtain frame, it is enough [of a sign of mourning] to detach it.”

What is the difference between a bed [

But was it not taught, The bed and cot after they are rubbed over with fish skin – what purpose is served by rubbing [the bed frame to smooth it]?

Said R. Eleazar, “We may solve this problem [as follows: Mishnah refersw to] those cots from which have openings [for the straps to go through. Since the top of the frame is exposed, rubbing it with skin serves the purpose of finishing it for use.]”

What is the basis for [the custom of] turning over the beds?

Bar Qappara, “[God] says, “I had a fine likeness of myself in your house and you caused me to turn it over. Now, you shall turn over your beds.” …

One must place a box containing scrolls at the head of the bed, not at the foot of the bed.

R. Abun in the name of R. Huna, “This rule applies when the bed is ten handbreadths high, as long as the cords of the bed do not touch th 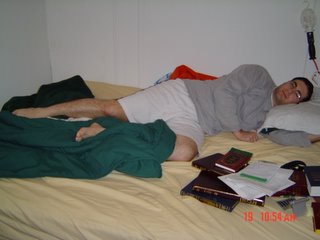 R. Yasa in the place of R. Samuel bar R. Yizhak taught in accord with R. Huna.

Tefillin – one must hang them over the head of the bed, and one may not hung them at the foot of the bed.

R. Samuel, R. Abahu, R. Eleazar, in the name of R. Hananiah, “Rabbi used to hang his tefillin at the head of the bed.”

R. Hezekiah in the name of R. Abahu, “One should not hang them like a basket, rather the tefillin above and the straps down.

The house of R. Yannai says, “When one wakes up from his sleep, he must say, ‘Blessed are you, Lord, who resurrects the dead. My master, I have sinned before. May it be thy will, Lord my God, that you give to me a good heart, a good portion, a good inclination, a good associate, a good name, a good eye, and a good soul, and a humble soul and a modest spirit. And do not allow your name to be profaned among us. And do not make us the subject of [evil] talk among your creatures. And do not lead us in the end to destruction. And [do not turn] our hope to despair. And do not make our welfare depend on gifts from other people. And do not make us depend for 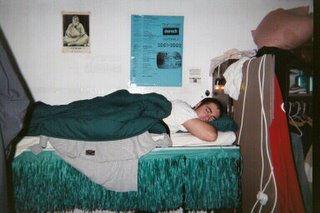 sustenance on other people. For the beneficience of others is small and their hatred is great. And set our portion with your Torah, with those who do your will. Rebuild your house, your courtyard, your city, and your speedily in our days.’”

Said R. Levi, “In three situations Satan is waiting to prosecute: he who makes trips all by himself, he who sleeps by himself in a closed-up house, and he who sets sail on the Great Sea.”

If someone said, “Come and recite this verse over my son, because he is suffering,” “Put on a scroll on him,” “Put phylacteries on him so he will be able to sleep” – it is forbidden.

Said R. Eleazar, “There is such a thing as a random meal [that may be taken outside of a sukkah], but there is no such a thing as random sleep. [All sleeping must be in the sukkah.]”

[Giving Eleazar’s reason] associates say, “For someone sinks into sleep.”

Said R. Ila, “For a man may sleep only a few winks and that is enough [sleeping for him, so it is never random].” 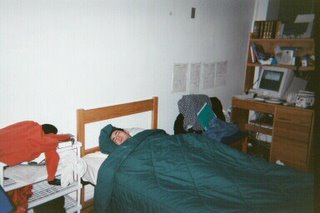 What is the definition of a minor?

A member of the House of Yannai said, “It is any who has to have his mother wipe him.”

R. Yohanan said, “It is any who wakes up at night and calls out, ‘Mommy.’”

I have not been following this conversation, so you may already have mentioned this, but I think there's something in Masechet Megillah about falling asleep while learning Torah. Maybe the 3rd perek? I learned it once on Shavuot (in the middle of the night) while I was fighting off sleep, which is the only reason why I remember it.

Is that Megillah reference in the Bavli or Yerushalmi? I've tracked down most of the statements in the Bavli, so I'm really just looking for stuff in the Yerushalmi now.
BTW, if you are referring to the Bavli, you're probably referencing Rabbi Zera's thing on 28a where he gives various reasons for his longevity - where he says "nor have I ever fallen asleep in the Beth haMidrash for any length of time or even momentarily (ולא ישנתי בבית המדרש לא שינת קבע ולא שינת עראי)."

My personal favorite, though not from the Gemarah-(I think)

This really keeps me going- working 28 hours straight in the hospital- Don't get me wrong- chas v'shalom I compare myself to Hashem(though many of the other doctors here do!), but I imagine myself as a vessel for Hashem's work -so He may watch over his children day or night.

I really like how in depth you looked into this topic..
I find sleep to be something that really defines our humanity.(As compared to the pasuk above) People can have tremendous power and achieve what we believe to be greatness, but as the hours sweep by, we are truly at mercy to our pillows(or Hashem)

MEAGIYKYC,
You're right - it's not from the gemarra, it's from Tehillim 121:4.
I'm glad that this helps! I'm surprised in a positive way - keep up the good work. Maybe I'll continue to find my Yerushalmi findings - perhaps I may post others as well.
As I, myself, am rather tired - I totally understand the idea of being at the mercy of one's pillow. Good night.