On The First Day of Hanukkah... 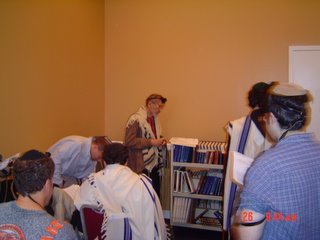 My first day and second evening of Hanukkah went well - mainly relaxing. I started off my day going to Mar Gavriel's special Hanukkah minyan (advertised on his blog here and here). As he has already blogged about this minyan, I will only compose supplementary notes about it here.
It was definitely strange that he pronounced 'dalets' as a "z" sound, though I was already familiar how he pronounced his 'ayins' in a guttural way. A central thing which was to make this minyan unique was saying a kerova during the repetition of the amidah, and it was - an Israeli one from back in the day (like antiquity). The structure of the kerova was such that there were a couple of lines to be inserted in each of the berakhos before the closing of each of the berakhah, save for את צמח (one of the blessings). As we had some time before it, however, as some copies were being 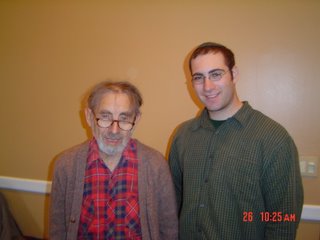 made, haGaon Rabbi David Weiss-HaLivni gave a little talk about how in ארץ ישראל (Israel), they used to have eighteen blessings, but in Babylonia, they had nineteen as being due to the splitting up into two separate blessings - where there had previously been one unified blessing - of את צמח and וירושלים, which explains why there was no addition for the former. Although I knew this already, as I had learned a year ago from the scholar and incredible mentsch Professor Lawrence Hoffman when he gave a week-long Minimester at YCT, especially as the ולמשינים prayer seemed to have been included in the original eighteen. Rabbi Weiss-Halivni didn't speak on this and actually kind of confused me, prompting me to question him on this, though when I spoke to him later, he seemed to be fine with that. Since we're on the topic of Rabbi Weiss-Halivni, I got to ask him a question about the blessings on Berakhot 60b, which I had been wondering about for a while. Specifically, I was mainly interested in the material about what to do when one is entering onto his bed to sleep as to which sort of material that is. He identified it as tannaitic as there is no amora attached to it (I thought that was kind of strange reasoning, but it had seemed to be to me that way from before, though as to the stuff one does upon waking may be something else? Unfortunately, he was doing this only from memory and not with a printed text in front of him, so we couldn't really go into it. As Mar Gavriel pointed out on his posting, it was for unfortunate reasons that Rabbi Weiss-Halivni was back in the States, but it was fortunate for us that he was there.
When Mar Gavriel said "וכל-הנוצרים כרגע יאבדו", I thought my ears were playing tricks on me or, more likely, that I wasn't paying that much attention to what he was saying, as often happens to many daveners. But once I saw his blog, I realize I wasn't just hearing things. It went well, overall, and there was even some food afterwards, in the meantime of which, I spoke with the president of the congregation, finding out more about KOE. When that was over, it was ten until twelve, meaning there was about an hour left in the YCT yom iyyun on sexuality less than ten blocks away, so Steg and I went on our way towards OZ, until we bumped into two guys he knew who had just left it. They said that it was almost over and it wasn't worth it to go at that time, so we chatted for a bit as Steg knew both of them. In the conversation it came up that one of them had lit according to Beit Shammai and the other according to Beit Hillel. Although that was interesting to do something like people don't, pretty much, do in the last two thousand years. However, he said, that the reasoning that it's like the offerings during סכות (Tabernacles) makes sense as Hanukkah was instituted as a kind of make-up Sukkos, but for the idea that we elevate in holiness sounds like it is a Xian idea. I found that very interesting, even if not based in fact (it might be worth some investigation, though I'm not up for this one).
Then I went back to my apartment and grabbed some lunch. I thought I would watch an episode of "24", having never (never ever, that's right, never ever) seen one. Um, yeah, it's good. So after I finished the first DVD of four episodes, I then watched "Serenity" with Darisa (cf. her earlier posting), followed by another four-episode stretch of "24". So now I have to send those DVDs back to BlockbusterOnline and wait a few days before I can continue. Trust me, I would be watching the whole first season right now if I hadn't ran out - it's that addictive(!).

I often like to read alternative accounts of the same event.

Now how do i get ahold of the dvd of Firefly?

Last night me and the one of those two friends who's also from Brooklyn took the other one on a tour of the borough. We saw Gerritsen Beach, the West Brooklyn coast, and spent a lot of time cruising around Williamsburg asking "vu zainen di yidn?" Eventually we found them, and had some Satmar hotdogs as a substitute for 'midnight shawarma'.