Tonight, I attended a panel on domestic violence in the Jewish community, with an emphasis on the Orthodox community, presented by the Jewish Law Students' Association of Brooklyn Law School. It began at six but, due to school ending at six, I didn't arrive until 7:15, catching the remarks of David Mandel (pictured), CEO of Ohel, which I found informative and interesting 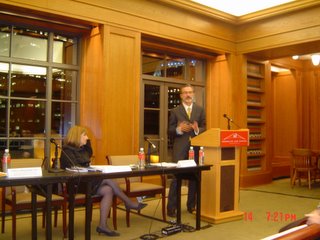 (e.g. He mentioned that we've been "speaking of domestic violence as a women's issue - it's a family issue" and that, in general, we "have to find a way to engage the husband".). After he spoke, the panel, which included Mandel in addition to Chana Widawski, a social worker, and Margaret Retter, a lawyeress, both knowledgeable in this area, responded to questions from the floor.
A few further interesting facts came about, such as that when Jewish women try to litigate, they often have much more limited financial ability than do their husbands, women are often concerned about their children's future shidduchim prospects, and, the most disturbing of all (though I'm not totally naive, it's still shocking to really think about it) is that it goes on everywhere(!). This last part certainly seems difficult for me to consider. Inasmuch as I know it surely must be so, it still seems hard to think about people the same way. Worse, I will have to deal with this sort of thing as a rabbi. (For another difficult issue for me and other rabbis to deal with, see this article.)

You could always teach middle school.

...But even that isn't insulated anymore.

Do happen to know where in the Talmud this quote is from? “Be very careful if you make a woman cry, because God counts her tears. The woman came out of a man’s rib: Not from his feet to be walked on. Not from his head to be superior, but from the side to be equal. Under the arm to be protected, and next to the heart to be loved.”

Yehuda,
Aside from me not wanting to go into education, middle school is where it starts (I think).
I've been searching, but haven't found anything yet for the supposed Talmud quote. I found by googling it, that it might also be something Philo wrote.

the most disturbing of all (though I'm not totally naive, it's still shocking to really think about it) is that it goes on everywhere(!).

Families find this subject incredibly embarrassing, and they attempt to cover it up. You don't hear about it since you tend not to nose into other people's matters.

Drew-
What's up with "lawyeress"?? As you are the one who has taken a gender studies course, not me (though I may take one next semester...), don't you feel that making a differentiation between males and females who practice law rather than equally considering them "lawyers" equally fit to serve is much better to use in our language? And I really hope that you have *never* referred to our female forebears as such - it really does sound kind of degrading, like "female lawyer: not on par with a *real* (ie-male) lawyer". Even if you don't percieve this - too bad, it still sounds bad to others.

(almost relevant side note: and now back to my regularly scheduled activity of working on law school apps!)

I came up with the term "lawyeress" in the spring of 2003. As the term "lawyer" is masculine, I thought that it sounded exclusive, as if women could not be lawyers. And as female, or women, lawyers is too cumbersome, why not just feminize the word to be inclusive of women in said profession?
You're right, Alexis, I didn't consider or perceive any degradingness towards such people, nor did (or do) suggest that women are less up to lawyerhood than are men. That's my take and that's your take.

In the Lee of the Wind said...

I kind of responded to this...but not the lawyeress thing..which is not that big of a deal...