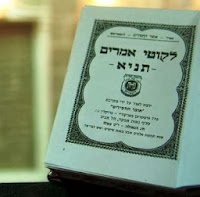 For a few years, I've been wanting to read through the Tanya (a/k/a Likkutei Amareem), written by Rabbi Shneur Zalman of Liadi, since it is a fundamental work of Lubavitcher Hassidim (a/k/a Chabad). This particular sect of Hasidim is not only the most well-known, but also the most financially successful group in Jewish life in recent years, enabling their further growth.  My interest in understanding what makes Chabad tick was also fueled by there being a large amount of Lubavitcher Hassidim in my area.  So, I decided I wanted to read through the Tanya/Likkutei Amareem and decided to buy a Tanya/Likkutei Amarim and, a little over a couple of years ago, I did.  However, aside from getting together a few times with a local Chabad rabbi, I haven't read much of it since then.

So, I realized that I needed to make a project out of it for me to write about it in order to keep me reading it.  So, I decided I'm going to start reading through the first part of the work, the Sefer shel Beinonim, chapter-by-chapter alongside writing about each chapter, so look for those posts to go up on my new blog :)  Wish me luck this time....
Posted by Drew Kaplan

Tanya reading, eh? You'd do well to have some kind of commentary with it. Some is pretty straightforward, some really needs explanation, esp. when you get to the second section, Shaar HaYichud VeHaEmunah. The commentary in the regular English Tanya is pretty clear; I think it's from RISchochet. If you want more, there's Lessons in Tanya (original in Yiddish, plus Hebrew and English translations. And much more wordy is R' Steinsaltz' Biur Tanya, originally in 9 small yellow Hebrew volumes, somewhat adapted into English in several (Opening the Tanya, The Thirteeen Petaled Rose, some others whose names I forget) volumes. Oh, and there's a short, clear Hebrew commentary in a single-volume Tanya called "Tanya Mevuar", light blue book.

Reading the Tanya is, according to the author, basic training in Chassidus. He was getting so many requests for audiences that he wrote down his main ideas in the Tanya, and told first-time visitors to go home and read this, and then come back and we'll talk.