Growing in Appreciation: A Year of Beer 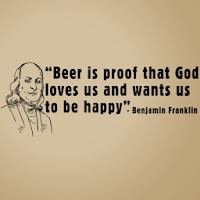 This past year, my appreciation for beer was deepened, broadened, and enhanced.  While I did not like/drink beer in college (I liked wine, though (not that I consumed it much), I did start liking to drink it in rabbinical school (it primarily began in the summer of 2005 (because by October 2005, when we threw our apartment-warming party in Washington Heights, we had stocked our refrigerator full of beers (Coronas and Heinekens))).  While I stuck to lagers, such as Corona, Heineken, and my economical favorite, Budweiser, I didn't venture much beyond that (although I do recall liking Stella Artois, at some point).
When I got into exploring cocktails after turning 30 (about which I will blog soon)), I didn't care much for beer, although I would have it on occasion.  I mainly felt that beers were so filling compared to cocktails (and to their alcoholic content).  Also, beers weren't that exciting.  I remembered seeing shirts with the Benjamin Franklin quote "Beer is proof that God loves us and wants us to be happy", and thinking "Why does it have to beer?  Maybe that can be extrapolate to any alcohol-consumption...."
Last August, while shopping at our local BevMo, I overheard a cashier responding to a customer that they offer $2 wine-tastings on Saturdays and $1 beer-tastings on Friday afternoons from 2pm-7pm.  Since I couldn't go there on Shabbat (even though it is on my way to shul), I realized that I could go on Fridays.  Not being much of a beer fan, per se, I decided I was an alcohol pluralist and wanted to expand my alcohol horizons and not only was it an inexpensive way to do so, but it's also a nice way to get into the Shabbas mindset. So, I went last September to a beer-tasting one Friday afternoon to try it out (at $1, it's not going to be a waste of money).  I thought it was good and went back the next Friday afternoon.  Then the next Friday afternoon, then the next.  Then I started recommending it to  other people then brought some with me (some of whom (primarily a neighbor, though) would pay for my tasting (not that $1 is a lot of money to shell out for someone else, but it's still a nice gesture)).


I was then going every week, even when Shabbat would come in earlier.  Although some BevMo locations began their beer-tasting only at 4pm, fortunately, our local BevMo began the beer-tastings at 2pm, so Shabbat was not an issue for me to go every Friday afternoon even in the winter.


One of the biggest lessons was that I liked more than just lagers and that there was quite a variety of ale types (including IPAs, which were disgusting (how could anyone drink what seemed to be pine needles (ugh!!!)))!  By November, I had started to really enjoy Belgian ales, such as Golden Ales, but particularly Trippels.  I really enjoyed the sourness of it(?).  That was my preferred beer style for a few months.


However, a change began to occur in December.  At a meeting in mid-December to discuss Jewlicious Festival 9, my predecessor, Rabbi Yonah, offered me a pale ale to accompany a burger (from the delicious Jeff's) and I actually thought it was tasty.  Moreover, the taste of it made me think it would go well with pizza.  So, that evening, I went out and got a pale ale and had some pizza.  Wow!  It worked really well :)


I then picked up Flying Fish's American Trippel.  I really enjoyed the yeastiness of it that was very Tripel-y, but was shockingly enamored with the hoppiness of it.  My tastebuds' curiosity was certainly piqued!  Thus began my interest with hoppiness.  My tastebuds wanted more!!

So, I began to experiment and have IPAs to try to quench my tastebuds' thirst for the hoppiness.  Throughout the spring, I began to have IPAs, then it got to a point where even some IPAs seemed to entirely lack a hoppiness!
Fortunately, because I do a fair amount of activities with young adults (20s-30s), I was able to incorporate beer and beer-exploration into some of my work. The primary example I use is that of my "Jews, Brews, and Rabbi Drew" series, which are potluck beer events at which I lead discussions on Jewish topics for 20s-30s Jews. It's a great concept!


My quest for hoppiness continued until Passover, at which point I had to take a beer hiatus, so my palate for hops dried up a little bit, but it started to return.  Then, in a late-May visit to Las Vegas, my wife challenged me to see if I could go a whole month without alcohol-consumption, so I agreed.  I chose June to just get it out of the way (that, and my wife was going to be gone for half of the month (I find that I drink less with her not around (no, it's not because she drives me to drink; rather, I enjoy her company and presence and am in a happy mood and want to enjoy it))); when I resumed consuming beer, I found that my palate had changed and that my hoppiness barrier was not as high as it had been.  In the last few months, however, it has returned :)
As a post-script to the BevMo's tastings: I was saddened when, in May, I found out that BevMo would be putting their Friday afternoon beer-tastings on hold for the summer (no tastings between Memorial Day and Labor Day) - (especially bizarre for me, considering that those months are when Shabbat enters the latest and a Friday afternoon activity of any sort is much easier to do!). However, after it returned this fall, I went once and they changed many things: 1) the hours were no longer 2-7, but 4-7 (which makes it tougher on us because it's erev Shabbat and I need to be home to help with the Shabbat preparations), 2) the price went from $1 to $2, and 3) they went from having 5-8 beers to having only three! It might not come as a surprise, but I don't know how much I will be returning to BevMo on Friday afternoons with these changes. However, I am still thankful to BevMo for their $1 beer-tastings last year. Anyways, I am looking forward to the next year of beer in my life :)  I now understand those shirts with Benjamin Franklin on them - beer is certainly a special beverage - differently enjoyable than bourbon or cocktails.  I think it is an especially happy-making beverage :)
לחיים
Addendum: One thing I began enjoying (perhaps spring/summer of 2012 (after the football season)) was to watch "Star Wars: The Clone Wars" episodes accompanied with beer & pizza. At the time, I drank lagers (for some reason, I really enjoyed drinking Sapporo (which Rabbi Yonah got me into) and Asahi, the dry-ness of which went - to my palate - went really well with pizza), which was great. When the football season ended and I resumed watching the series in the spring/summer of 2013, it was markedly different the styles of beers I was enjoying to accompany my pizza and "Clone Wars" experience (e.g. here and here)!
Posted by Drew Kaplan