Gender-Neutral Bathrooms: What is the Halakhah? 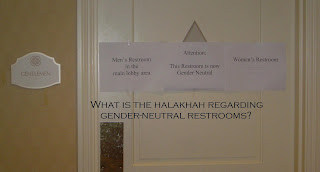 Earlier this week, while I was at the Jewish Funds for Justice's Kehillot Kedoshot gathering, the men's bathroom that was in proximity to the epicenter of the conference (it was in our wing of the hotel) was converted to a gender-neutral bathroom. Now, the women's bathroom wasn't so far away, but I imagine that the conference went ahead with this measure because they thought that the women needed more stalls. Unfortunately, the next closest men's restroom was near the lobby, a couple minutes away.
While I was not sure whether I would personally be comfortable or not using the gender-neutral restroom, I figured it would not be an appropriate thing as an Orthodox rabbinical student to be doing. In fact, none of my fellow YCTers used it either. I think we figured that it was not צניעות (modest) to be doing so. I just had never before contemplated the halakhah about gender-neutral restrooms before, though it was interesting to encounter.

Dumb question: Why do so many people use the noun "tzniut," modesty, instead of the adjective, modest (tzanua?)

I think the better question isn't the lechatchila (which is obvious) but the bediavad. That is, to what extent are you required to "hold it in" to avoid using a mixed-gender bathroom.

We have "bal teshakzu" and "kavod habriot" on one side, an an amorphous notion of tzniut on the other. Amorphous because there isn't any actual observation of ervah. Would that notion of tzniut be sufficient to enter the realm of abizraihu?

What is the time limit for which you would be expected to search for a gender-segregated bathroom as opposed to a mixed one? Would it be like the shiur for washing the hands (18 minutes)?

You forgot the issue of yichud, LR.

Lab Rab,
I, too, thought of "bal teshakzu" and "kavod habriot", as well, but the time-limit concern is an interesting point.

I beleive gender neutral bathrooms are usually designated to give a comfortable space for people who may be transgender, transsexual, or in some other way find it difficult or impossible to use bathrooms for "men only" or "women only".

Well its certainly not an issue of Yichud as a public bathroom is a public space and anyone can enter at any time.

Its more of a problem that bathroom stalls are not very private. Which begs the question why not? Why can't we have a little privacy to do our business? I suppose that is more of a public policy question.

Why are we so frightened of the possible nefarious evildoing that might happen in public bathrooms if it had full doors and walls that we must punish the vast amount of law abiding public citizens?

If bathroom stalls had real privacy then the mixed gender bathrooms wouldn't be an issue, halachic or otherwise.