The Treatment of My Rheumatoid Arthritis Begins

When I was told by the rheumatologist [the first time I met him] that I had rheumatoid arthritis, it was quite shocking - not only surprising, but shocking, as well. Of course, I knew there was something wrong with my body, but I thought it was something of a temporary nature, not something that would continue to afflict me throughout the remainder of my life. It still is hard for me to wrap to head around the enduringness of this condition – I still, on some level in my head, think that it’s temporary (even if I’ve been told that it’s not).

While I was still in shock about my new diagnosis, the rheumatologist began discussing treatment options. 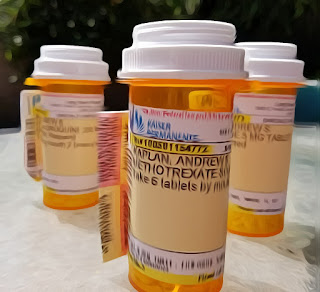 Mostly, the treatment options concerned taking pills, which are no problem for me. He also mentioned a shot, which gave me pause.

A few days following the visit, I did take him up on getting the shot. It was a steroid shot, which, the following day, I already felt the results. It had, overnight, decreased the swelling in my feet and hands. That was fast! I was very glad to have, for the first time in months, not have swollen hands nor swollen feet. I was excited that it not only worked, but had worked quickly, as well as relieved about the swollenness. While I also was concerned that I might need to have the shot again because maybe the swelling would return, to this day, the swelling hasn’t returned (at least not to the degree that it had been before that shot).

There were three pills that he had prescribed. One was a painkiller that would take the place of any others (e.g. ibuprofen, acetaminophen, etc.) should I need a painkiller or to reduce swelling. While I took it regularly at first, I now seldom use it. But there were two other pills I took that were meant to deal with the condition.

One pill was meant to block the signals causing the inflammation,* to be taken regularly. I’m not sure if it has helped or not, even to this day. Nevertheless, I still take it, because it may be working – it’s hard to tell, since the other pill had noticeably positive effects.

The other pill worked considerably well!** Wow – right from the start it worked well and continued to work. Unfortunately, it seems to be a short-term solution to this long-term problem. Nevertheless, it significantly decreased the tenderness I experienced in the parts of my body where I noticed the greatest amount of tenderness (i.e. hands/fingers/wrists, feet, knees, shoulders, and elbows). Not only did it greatly help me do everyday things (e.g. picking things up, moving things around (including my kids)), but I noticed it the most while weight-lifting. It definitely helped my body (particularly my shoulders and elbows) move and use strength. It also helped with energy, as it was quite an energy boost – very noticeably physically, but also mentally, as well (it also gave me a self-confidence boost, as well). Of course, it was great when going to the gym, as I had an energy boost, but also just doing things throughout the day. It was definitely something to be taken in the morning and not later on in the day.***

Unfortunately, my rheumatologist told me to only take smaller doses of this latter pill, resulting in an increase in tenderness in my joints. As of last month, I have decided to take a break from weight-lifting, since my ability had been greatly diminished from when I had been taking higher doses of this medicine. Although I kind of miss having weight-lifting as both part of my lifestyle and routine, as well as its effects on my body, I also can’t ignore that my bodily abilities to lift weights in any realm of my life have been severely reduced.

The latest news in my treatment, however, have been saddening. Since the other pill* didn’t seem to be working enough (although we’re still keeping it as part of the treatment on my body), the rheumatologist has added a new pill. The pill, itself, seems to be fine (although I’ve only taken it twice, as its dosage is weekly),**** but it’s not so great for various aspects of my body. The most concerning of these is that it’s not good for the liver. Thus, a severe restriction on alcohol intake :( So, while alcohol is generally not permitted for those taking methotrexate, the rheumatologist says it’s alright if I have 3-4 drinks a month.  Yikes! In any event, I’ve barely sipped alcohol in the last couple of weeks on account of this new medicine. (I hope to write more in the future about this severe reduction on my alcohol intake….)

Anyways, that is what is going on in treating my new condition.
* If you’re interested, it is hydroxychloroquine.
** If you’re curious, it’s prednisone.
*** When I picked it up from the pharmacy, I was told by the pharmacist not to take it after 9am – “9:00 AM?” I asked, to which she replied that some patients have had trouble sleeping when taking it later in the day. I initially brushed off the warning and took it right away, since I wanted to have the pills start working, even though it was in the middle of a Friday afternoon. Wow – was I bouncing off the walls that night! I couldn’t fall asleep until 4am (and, yes, that included a lot of alcohol, which had little effect on my drowsiness). I then made sure I took it early in the morning and definitely did not take it in the afternoon.
**** Again, if you’re curious, it’s methotrexate.
Posted by Drew Kaplan

Hi D. Kaplan - I came across this yesterday. I used to 'talk' with you occasionally on line. Hope you are doing better soon.
Steve Radcliffe,
Spokane, WA