Tabling for Hillel at the ZBT Convention 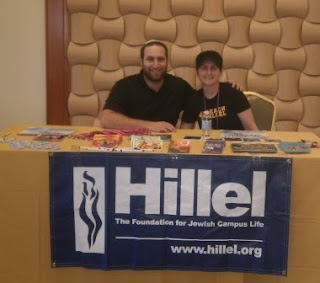 Yesterday, my wife (who is the Director for Beach Hillel) and I manned the table representing Hillel at the national ZBT convention in the Marriott in Manhattan Beach. Hillel was one of a half-dozen organizations tabling, most of whom were Jewish (Young Judea, Chabad on campus, and Maccabi World Union along with OmegaFi and Movember).
ZBT, which are the Greek equivalent for the Hebrew initials צב"ת, stands for ציון במשפט תפדה - "Zion shall be redeemed with justice" (from the first half of Isaiah 1:27),1 is the first Jewish fraternity, which makes sense why there would be so many Jewish organizations represented. However, over time it became simply a historically Jewish fraternity (or, as it was described to me, a non-sectarian Jewish fraternity).
Although we were situated next to Chabad (yes, they had tefillin and were ready to help the Zebes wrap), the interesting ongoing amusing interaction took place at the table across from us. The lady at the Young Judaea table was primarily trying to get the Zebes to sign up for Birthright Israel trips, in which many brothers were interested. However, when she asked if they were Jewish, many of them said they weren't, whereupon she asked if they could pass on the word to their Jewish fraternity brothers. I found it amusing, but probably somewhat confusing to the gentile Zebes.
One further thought: an organization which was not subtly founded as a Jewish-Zionist organization, as mentioned above (and with an inspiringly hopeful phrase behind it, to boot), one would hope that it would be the same today. Although there was a ZBT chapter at the university from which I graduated, I wasn't very familiar with it. But, when I was looking recently into ZBT, I discovered what it's acronym stood for and thought that it was not simply a Zionist/pro-Israel group, but could be an advocate for Israel. Moreover, especially in light of what's been happening recently (e.g. the Goldstone Report), it would be a group that would yearn for Israel to be justified and advocate for it. Moreover, amongst the three Jewish fraternities (AEPi and SAM being the other two), it would be the one to attract students who would advocate and defend Israel on campus, perhaps being partners with either pro-Israel groups (e.g. Anteaters for Israel) or Hillel to strategically deal with anti-Israel activities, speakers, or other such matters (such as the traveling "Apartheid Wall"). However, just because that's the organization's name, doesn't mean that that's what they stand for, as they took out the Zionist part of it shortly after starting up.2 Nevertheless, it will still be interesting working with the local ZBT chapter, as a minority of the Zebes are Jews - but it should be fun :)

The initials ZBT and the group's chosen Hebrew motto, Zion be-mishpat tipadeh (Zion shall be redeemed with justice), a quotation from the book of Isaiah, well-known in learned circles, had been the suggestion of the men's Bible instructor, Rabbi Bernard Drachman (1861-1945). The ancient phrase had already been taken up by the budding Zionist movement, and the full quote - Zion be-mishpat tipadeh ve-shaveha be-tzedaka (Zion shall be redeemed with justice, and they that return of her , with righteousness) - is emblazoned in Hebrew on the delegate's badge, which Gottheil himself wore to the fourth Zionist Congress in August 1900 in London."

Marianne Rachel Sanua, Here's To Our Fraternity: One Hundred Years of Zeta Beta Tau, 1898-1998 (Hanover, NH: Zeta Beta Tau, 1998), 11.
2 - "The group's formal objectives, according to its first charter, were "to promote the cause of Zionism and the welfare of Jews in general; and to unite fraternally all collegiate Zionists of the United States and Canada." - Ibid., 12. However, soon, the Zionist part was taken out:

As one of the founders, Maurice L. Zellermayer, reported, in an early history of ZBT, "Zeta Beta Tau: The First Twenty-Five Years, 1898-1923," "It was found that it would be for the best interests of the Fraternity not to limit ourselves solely to the question of Zionism, that, as a Jewish College Fraternity, we ought not to shut out those Jewish college men who were desirous of entering our Fraternity, but had not, as yet, taken any definite stand on the Zionist question." Within a year (November 1901), ZBT's administration had revised its charter to eliminate the goal of promoting Zionism and had resolved that the new object of the fraternity would be simply the "promotion of Judaism."

Email ThisBlogThis!Share to TwitterShare to FacebookShare to Pinterest
Labels: ZBT

Also remember that at the time of ZBT's founding (and its four "absorbed" fraternities), as well as the existing historically Jewish Beta Theta Pi, Sigma Alpha Mu and Alpha Epsilon Pi, membership in Greek-letter societies was denied to Jewish men. ZBT became a non-sectarian fraternity in the mid-fifties.