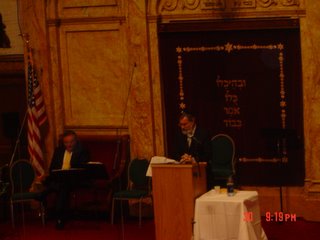 speaking at the podium, with Richard Joel sitting behind his right shoulder). His lecture “The Chaos Theory of Virtue” was on how “Small acts can have large consequences,” that “whatever we do has incalculable consequences.” A closing thought he shared was that we the Jewish people need to show, in the face of fundamentalist tendencies the world over, a “counter-fundamentalism of love.” I thought he was a little over the top in the way he spoke, but one did get the sense that he is quite used to speaking. As Lab Rab, who was sitting next to me, mentioned afterwards, that it was very simple concepts he was trying to impart, but was pulling a Mesillat Yesharim – revealing what we already know. I wasn’t tremendously impressed, but it was a treat, nevertheless. I imagine if he came to speak to a rabbinical school, it would be more interesting and detailed than to a general public, as he did this evening.

I was pleased with President Richard Joel’s remarks, as he was lively, humorous, and personable.

The least lively speaker of the evening, but undoubtedly the most controversial, was Susan Wexner, in her speech on “The Left, The Right, The Wrong.” It was a little troubling for me as she spoke about politics, explicitly saying that the Bush administration has already been failing (I agree with this, but it was weird to say it in such a forum for me). Anyways, she made a very good and strong point to say that it has been horribly unfortunate that being pro-Israel has become associated with more conservative, right-wing elements, thus being bad for leftists. However, this is oddly striking as there are many leftists who support – how are they to deal with this? She was saying that it should not be a political issue as to on which side should being pro-Israel be, but rather that it is a moral issue – it is right to be pro-Israel; that it should not be an issue of being on the left or being on the right, but rather whether it is right or wrong. She took aim at the development of crude ideological camps, that of the left and that of the right, which stem from the tide of knownothingness which is sweeping college campuses (it’s definitely there, at least at IU when I was there), where labels replace 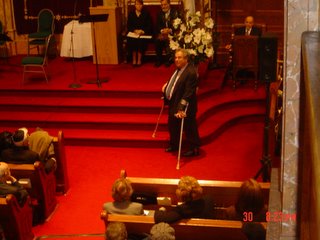 thought, thus then there is no further need for thought. She wanted to suggest that there should always be right and wrong. Although I find it difficult for me to agree with that last sentence, I did like her taking aim at the knownothingness.

A surprise guest, Itzhak Pearlman (pictured to the right), showed up, also, and introduced the quartet, Ariel, which was playing this evening.

Weird, my aptmate who went to it said that she was very right-wing and said that "the left" should be renamed "the wrong" [in relation to "the right"].

I don't know I would use such a label, I think that was what was troubling me - her leaning towards moral certitude. She was steering towards an objective morality, which is troubling. Not that I am totally subjective about morality, but neither am I objective about it.
She was definitely trying to rename "the left" as "the wrong" - she even was explaining in her speech how people she knew who were liberal and pro-Israel were now finding themselves in an uncomfortable position as the left is now not pro-Israel. She was actually against such encampments such as the left and the right, but rather to think about things, without just jumping into parties.