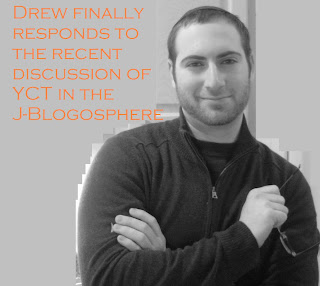 It's been nearly two weeks since I first read a certain article printed in a certain haredi (ultra-Orthodox) paper questioning my school, that had been widely disseminated across the Internet and popping up on various blogs. While I had initially wanted to respond to the article in a thorough way, I was concerned, however, of not being properly able to respond to the concerns and questions brought up by the author of that article. In addition to that, I was also wondering about the time that that would take up. My sense of wanting to properly respond to various concerns were not being helped by reading the proliferation of blogs covering this issue - this topic was waiting to be addressed.
After a week of waiting and thinking it over, reading other blog postings, and reading comments threads, I wanted to put in my two cents' worth on this issue (if this had happened a year ago, I would have responded much earlier - trying to get a lot of readership, but have realized that that's not so important). I think there's a certain value to hearing from one within the institution under discussion, even if it is only from a student. However, fortunately, I held off and there are multiple responses to the issues brought up in the article. Most notably is the recent response composed by one of my rebbeim, Rabbi Nathaniel Helfgot, wherein he deals with several of the issues brought up in the article. For a couple of other responses in the blogosphere, see Jonathan Baker's critique of the article as well as Rabbi Josh Yuter's posting.
Anyways, I think people were waiting to see if I had a response to the article. At this point, it's really not worth the effort as the Yatedniks are probably not going to be convinced, and a lot of Modern Orthodox people, like many I know have just laughed at the article, some saying it was a good promotional tool for YCT. However, I think there are a number of people who sincerely do not know what to make of the attack or of the school (perhaps they don't know much about the school or something) and would stand to benefit from a thought out response. Anyways, I'm satisfied for the time being with Rabbi Helfgot's response and I don't really feel like bothering to respond to the article (lest I legitimate it (hamevin yavin)).
----------------------
Postings discussing the recent article:
"YCT: Time To Take A Stand" | "Glass Houses Alert" | "Conflicted about YCT, Yated and R' Harry Maryles" | "Yated's YCT Critique Critiqued" | [untitled] | "Not Taking A Stand" | "The Challenge of Constructive Criticism" | "Yated Ne'eman's Latest Against Chovevei" | "Rabbi Chaim Rapoport -- Open Letter to the Yated Ne'eman" | "In Defense of YCT" | "A Letter from R. Nati Helfgot" | "In Defense of YCT" | "Is YCT Treif or Not?" | "Strange Bedfellows" | "Taking Each Other Down A Peg" | "Paradoxical Faith" | "What Makes A New Movement Acceptable?" | "Yated Exposes YCT as a 'Threat To Halakhic Judaism'" | "How mighty are the righteous...." | "Yated" | "YCT-Yated Ne’eman Dustup" | "The Yated - a Mamzer?"

"I don't really feel like bothering to respond to the article (lest I legitimate it (hamevin yavin))."

I'm sorry Drew, but your decision not to address the controversial positions of your Yeshiva make it look like you're not sure how to defend yourself.
R' Helfgot's letter as well, doesn't deal with the issues that take YCT beyond the "pale of Orthodoxy", it just skirts around certain ridiculous points that the Yated article cited.
Hamevin yavin, from someone who has been in a similar situation, if you had something to say you would say it.

I sure wish I knew how to make a link.

anonymous number one- if you had something to say why would you post anonymously?

I don't understand what you are asking Sharon

An analysis of the Yated's response to criticism of its article at http://www.avakesh.com/2007/03/yct_and_ytn_yes.html

Drew - congrats on acquiring the maturity to remain silent. You have made a great deal of progress towards becoming an outstanding rabbi.

don't forget to check out the latest post at http://openorthodoxy.blogspot.com.

Don't you worry, Anonymous, I've got the RSS feed to the ironically named Open Orthodoxy blog (ironic in that it represents Closed Orthodoxy).

I must have some fans. I didn't post any of the anonymous comments that reference my blog!

btw, you say that I represent "Closed Orthodoxy"...

...the only Orthodoxy that is now closed in Phoenix, AZ is the local "Open Orthodox" shul run by a YCT grad. It had over a year to make it, with over 100,000 non-affiliated Jews in the Phoenix area as potential affiliants. I guess it wasn't "Open" enough.

Hey Drew, I just saw this interesting photo of yours.

Was that in El salvador or Costa Rica?

It appears to be a picture of shachris-time with some dancing (men and women in the same circle), and women in talesim, without a mechitza, with you on the right-hand side.

Would you like to supply a little context to it, in case I post at my blog?

Mark,
As to your first comment, I e-mailed R' Kleinberg about KiDMA and while they are, for the time being, not holding services, he will still continue to be having classes, so it may be a bit premature to say that the Open Orthodox shul in Phoenix has now closed.
As to your latter query, neither any of the four YCT guys, nor the two YU guys (to the best of my memory from over two years ago) were taking part in the Hallel service that was taking place on that Rosh Hodesh. I can say for certain that for none of the ikkar part of the davening did I participate in the minyanim (I davened beyihudus for tefillos, though I served as an audience member for the public tefillos (I do not recall what the other five Orthodox rabbinical students did)). As for the Hallel service in particular, I do not remember what it is that we were singing or if it was just a niggun to which we were dancing. Alternatively, it could very easily have been that after I davened off by myself, I joined in off to the side along with the other five Orthodox rabbinical students in singing the tehillim of Hallel and dancing broke out.

Thank you for the clarification of the photo. A picture without a caption may be out of context.

Maybe you have an unusual definition of a shul that is different than most people, which is foremost "shul = prayer". Hence, maybe Kidma is an organization of some sort, but to label it a shul (especially one that claims to be Orthodox!) without ANY weekly or holiday Tefilah services, is rediculous and just plain insulting.

The wording of kidma's note implies more than a temporary suspension: Services are being "suspended" and Kidma is redirecting its energies elsewhere, into other forms of programming.

If R' Kleinberg wishes to resume regularly scheduled davening, well then the shul is reopened.

Maybe you can provide some examples of Orthodox shuls that provide zero prayer services. Or maybe this is just a new "Open Orthodox" innovation?

Mark,
If you want to get into semantics, then, yes, as a shul, it is temporarily no longer operating. However, as an organization, it still remains running [in the form of programming and classes].

Nothing on the blog really represents "Closed Orthodoxy".
I believe the blog is open to all orthodoxy.
They just hold to certain standards in order to be considered "orthodox".
It simply questions the orthodoxy of organizations like Kidma.